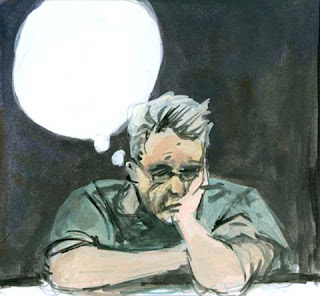 Well I was going pretty good for a while, putting an entry onto this blog at least every one or two weeks but since mid-April I've been afflicted with the condition depicted above. The words just haven't come.  It didn't help that for a while every DVD I put into my player was either skipping, freezing or not playing at all.  Finally it dawned on me that my player was ten years old. So I went out and bought a new one and solved that problem.  I've gotten back to seeing movies more regularly the last couple of weeks. I've been returning to my various box sets of Charlie Chase, cartoons, and Thriller and I've seen a couple of feature films that really impressed me, A Marine Story and, just today, The High And The Mighty, but nothing has inspired me to write yet.

Then too I'm probably a little down because I just received my final package of review CDs from Cadence and I know that once I write these up, that will be my last work for the magazine.  They're ending things in style though. They sent me 32 CDs in just about every Jazz-related genre imaginable:  free improv, piano, blues, large ensemble, vocal and God knows what else.  There are a few names I know in the pile like Archie Shepp and Marc Charig but most are by people I never heard of before, which I love.  Discovering new musicians has always been one of the most fun parts of reviewing for me.

Hopefully I'll pull out of this mental tailspin soon. Something I see or hear will start the creative synapses firing and I'll be back here writing about it. When that will be though, I can't say for sure.
Posted by Jerome Wilson at 10:13 AM