To Jazz Or Not To To Jazz

One of the things that slightly bothers me about the internet is that on some message boards, you find people who take their love of a certain area so seriously that they get very upset when they feel that something else is taking time or attention away from their precious object of affection (and I'm not even talking about Glenn Beck or Sarah Palin fans). 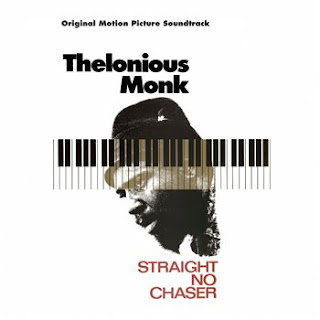 Fro example I was reading the Turner Classic Movies message board today and saw that someone had started a topic "What movies was Dave Brubeck in??".   It so happens that TCM showed a group of jazz documentaries and features last night produced or directed by Clint Eastwood, including documentaries on Dave Brubeck and Thelonious Monk, and Eastwood's Charlie Parker biopic, Bird.

I missed the Brubeck film last night but I'd seen the Monk one, Straight No Chaser, several years ago in a theatre and it's excellent.  Still these message board folks were all spun up that TCM took a few hours away from what they consider "classic movies"  and made some unholy alliance with Clint Eastwood to show pictures about a couple of weirdo jazz musicians.

I've only been able to get Turner Classic sporadically over the last few years due to all the moving I've done but when I do have it like now, I'm amazed by the variety of their programming.  Yes, there are a few movies like Lawrence Of Arabia and Gigi that somehow manage to get on at least once every month but they also have a big enough range to include silents, foreign films, Tarzan movies and old serials. Any movie channel that has the nerve to program Jeanne Dielman, 23 Quai du Commerce, 1080 Bruxelles and feature singing cowboy movies for a month, as TCM will do in July, is okay with me.  The last time I checked documentaries could be considered classic films and it would be fine by me if TCM threw in more jazz films once in a while like Sun Ra's Space Is The Place or Shirley Clarke's film about Ornette Coleman, Ornette: Made In America but I know there's fat chance of that happening so I'll take what I can get.

And incidentally the gentleman on that message board might be surprised to know that Dave Brubeck has been in a regular movie,  All Night Long,  a British film that updated the Othello story to the 60's London jazz scene. He was part of a sort of Greek chorus of musicians that also included Charles Mingus, Tubby Hayes and John Dankworth who played throughout the film. See below... 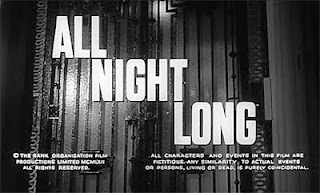 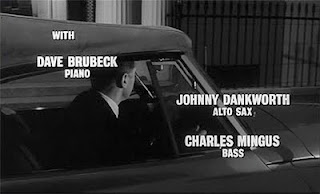 Posted by Jerome Wilson at 6:49 PM

I had seen the Eastwood documentary on Dave Brubeck when TCM aired a series of films celebrating the pianist’s ninetieth birthday. The films included All Night Long, which I thought was one of Basil Dearden’s inspired choices for material. I re-watched the film a few nights ago and a question occurred regarding the vocals for the female singer. Johnny Dankworth was married to Cleo Laine, there is a brief reference to her in one scene, and I wondered if she provided the “vocals” for the lead female. I was glad to have a chance to see the Monk documentary, and the titles you mentioned would make an equally great night of films to me.