Judi Dench deserves all the accolades she is getting for her performance in this film but a lot of love also needs to go to Steve Coogan who co-wrote the script and played the male lead.  The script is a lot more acerbic than it could have been given the film's tearjerking storyline and Coogan plays his role with the same  subtle petulance he brings to his comic parts.

This could have been much more over the top. Coogan plays a disgraced government press secretary  and Dench plays Philomena, a woman with a secret he thinks he can exploit for a magazine article. She had a son out of wedlock while living at a Catholic school fifty years earlier. The child was adopted by a rich couple and the nuns forbade her to have any contact with him. Now an old woman, Philomena decides to find out what happened to her son and she enlists Martin's help in doing so.  For his part Martin is subtly contemptuous of the entire exercise and looks on it as an opportunity to reestablish his writing career. However as he helps Philomena in a search that takes them all the way to Washington, DC he grows to respect her and becomes emotionally attached to her story.

It's a story that could have easily been schmaltzy but outside of the overblown orchestral score, it doesn't. Dench and Coogan both play their roles with a clear-eyed intelligence and straightforwardness that keeps the bathos to a minimum. No big speeches or weepy moments, just two actors who communicate volumes through their eyes and facial expressions.  I love Steve Coogan dearly for his various TV appearances as the obnoxiously clueless talk show host, Alan Partridge, but this film shows that he can play seriously equally well. 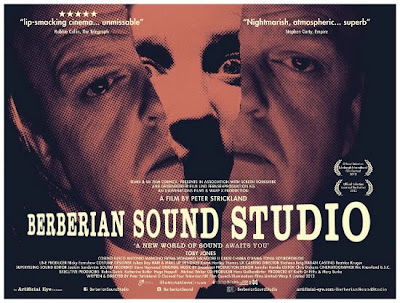 I sort of liked this film even though it wasn't what I expected.  It won points from me for simply referencing avant-garde mezzo-soprano Cathy Berberian in its title and from the little I heard about it, I expected some kind of homage to the 70's Italian horror films of Mario Bava and Dario Aregento.  It is in some ways but it's not a horror film itself.

The plot concerns a BBC sound engineer who is mysteriously hired to work on a low-budge horror film in Italy. When he gets there he finds the producer and several crew members to be vaguely sinister and the voice actresses dubbing the film to be on edge. Furthermore the director is a flamboyant "art is everything" type and the screams the engineer has to work with on the soundtrack seem disturbingly real.

However that setup does not lead to anything really evil. No one is being murdered or tortured by the crew.  The real drama comes in the way working on this film starts to unravel the engineer's mind. After a certain point the film narrative starts to disintegrate and by the end, what you have is a meditation on the melding of fantasy and reality in filmmaking. It comes out more Bergman and Antonioni than Bava and Argento.

For all that I think I liked the movie. Toby Jones is very good at conveying the unease and fears of the engineer and there is a convincing 70's Italian thriller vibe to the production as well as some nice little jokes and insights about the work of film dubbing. I would like to see this again sometime to make out exactly how successful it is at what it attempts. 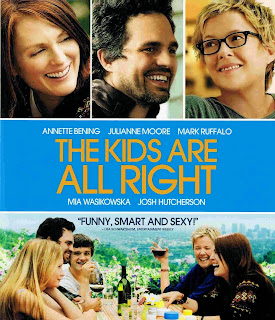 This wasn't what I expected either but in a good way. The plot concerns the son of a lesbian couple who becomes curious about the identity of his birth father and finds the guy who then inserts himself into the family and even takes one of the two partners to bed.

I thought the movie would have a lot of angsty scenes about a rebellious kid who rejects his parents for a father's love but I should have known better. The film was written and directed by Lisa Cholodenko who is gay and has a son by a sperm donor in real life. She presents the two women partners, played by Annette Bening and Julianne Moore, and their teenage kids as a real family and the "father" played by Mark Ruffalo as a self-centered free spirit type who is ultimately rejected by everyone when he is perceived as a threat to the family unit. It's also a funny social comedy with far more literate dialogue than you find in most romantic comedies these days and nice unique touches like the kids' casual acceptance of their mothers' lifestyle and the actual constant use of the term "sperm donor" instead of "father". This film wasn nominated for several Oscars but didn't win and the ones that do that tend to be quickly forgotten these days. I hope that doesn't happen here. With this movie's warmth and resonance it deserves to be remembered.
Posted by Jerome Wilson at 7:37 AM