Here we go again. Two more of my favorite jazz players have passed away within the last few days. A couple of weeks ago it was Chico Hamilton. Now it's Stan Tracey and Jim Hall. 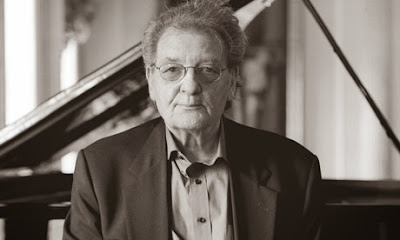 Stan Tracey passed away on December 6. He is not a name most Americans know but he was one of the legendary figures of British jazz. He gained his first big reputation as the house pianist at Ronnie Scott's Jazz Club in London in the 1960's where he played piano behind visiting American stars like Ben Webster and Sonny Rollins. He was known for his craggy piano style, a sly, inventive variation on Thelonious Monk's sound, and his composing. He wrote many suites and literary adaptations for bands of various sizes with the most famous being a suite based on the Dylan Thomas play, Under Milkwood. He was a traditionalist at heart with an great affinity for Monk and Ellington but starting in the 1970's he would occasionally explore the free jazz leanings of the younger British players of the day. He even recorded fully improvised albums with two of the biggest names of the younger generation, Keith Tippett and Evan Parker. He received many honors in his life including the Order of the British Empire and was performing and recording up until the end, releasing a final album, The Flying Pig, just a couple of months ago.

This is the most famous of Tracey's works, "Starless And Bible Black" from the original 1965 recording of Under Milkwood with Bobby Wellins playing remarkable tenor sax:

Here he is live with his quartet on a 2009 broadcast of the BBC television show, Later...with Jools Holland: 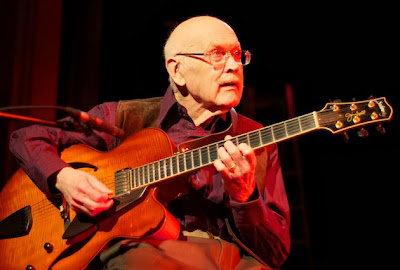 Hall left us just yesterday. It would be very hard to find any jazz guitar player active today who does not have a little Jim Hall in him. His dry, crisp sound has influenced generations and he has been a sparring partner for musicians who ranged from Sonny Rollings to Pat Metheny.  He first gained notice in the intellectual but swinging bands of Chico Hamilton and Jimmy Giuffre.  After that came collaborations with, among others Art Farmer, Bill Evans, Bob Brookmeyer and Ron Carter. Some of the later folk who paid attention to him included Bill Frisell, Chris Potter and Joe Lovano.  He played in Washington with Lovano just a few months ago and in my everlasting stupidity I missed it.

Hall had a way of voicing chords that always seemed fresh, a malleable low-key style that was melodic, frisky and classy.  Here he is playing the blues with disciple Frisell in a 1995 concert: