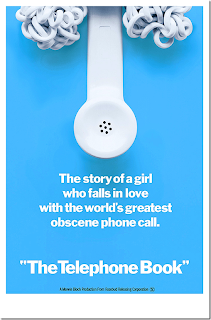 Browsing through Netflix Instant I occasionally like to pick up on films I never heard of before. That's how I found The Telephone Book.  I watched it the other day and I'm having a time convincing myself that it wasn't some wacko hallucination.

The Telephone Book is a sex comedy made in New York in 1971. It concerns Alice, a free-spirited young woman who one day receives an obscene phone call that she declares is the best she ever heard. She sets out on a quest to find the caller and has encounters with different types of perverts like you'd only find in New York before meeting her dream man. This premise could easily have been turned into a grubby porn film but with professional acting, a funny script and a genuinely positive outlook towards sexual adventure, this specimen is far more than that.

The film was written and directed by Nelson Lyon who was a friend of John Belushi's and worked as a writer on Saturday Night Live and he concocted a daffy, light comedy that goes counterculture without being heavy-handed. The cast is full of high-quality actors and includes some surprisingly familiar faces. Jill Clayburgh has a small role which is not too surprising since this was at the start of her career but Roger C. Carmel and Barry Morse, two then familiar character actors, also show up as a couple of the perverts.  Morse was most well-known for playing Lt. Gerard on The Fugitive and, after seeing him here playing a porn actor literally covered with naked women, I can never watch that show the same way again.


Alice is played by Sarah Kennedy, a bubbly little blonde with a resemblance to the young Goldie Hawn, who later became a Laugh-In cast member. There are also a few Andy Warhol regulars around the periphery like Ondine and Ultra Violet which is no surprise since the film resembles a Warhol movie with real humor added. The caller himself is played by Norman Rose who was the preeminent voiceover artist of his day, known for doing a bunch of commercial gigs and the National Lampoon "Deteriorara" parody.  In the last part of the film he shows up at Alice's apartment wearing a pig mask and tells her the story of how he became an obscene phone caller, a long monologue about dropping out of the mainstream that his deep, burnished voice makes compelling. Alice is enraptured and begs him to have sex with her.  They do in a fashion but you don't see any actual simluated or real sex. Instead it is illustrated by a wild hardcore animation that's a bizarre cross between R. Crumb, Ralph Bakshi and Hieronymus Bosch.

Looking for information on the internet on this thing I found that this movie wasfar more talked about than seen for many years before someone released a  full-blown Blu-Ray DVD version which is the version on Netflix. There is a trailer for the film arounf which which contains praise from Steve Martin among others and it's easy to see that this crazy little oddity could get a cult following if more people were aware of it. It's an amazing little relic of its era that touches on the work of Warhol, William Klein and Terry Southern but has its own distinctive sex-positive sweetness. Lord knows it's far more funny than a lot of better-known satires from that period.
Posted by Jerome Wilson at 3:31 PM