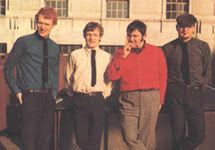 I have this great curiousity about things off the beaten path, either modern and abstract or forgotten bits from the past. Therefore I get really excited about DVD and CD releases of old obscure work, such as the forthcoming 3-DVD release of the landmark first talkie feature, "The Jazz Singer" that is going to include over three hours of early sound shorts.
In looking through an upcoming DVD list yesterday I ran across an old British 60's rock musical called "Gonks Go Beat". That name was familiar for some reason so I looked it up and saw why. This movie featured an appearance by the Graham Bond Organisation. Bond was a powerhouse organ player and singer who came up in the British blues boom of the 60's. I came to dig him in a backwards way. I first got into the British jazz-rock group Colosseum. The I ran across a Graham Bond album, Solid Bond, which featured that group's Dick Heckstall-Smith and Jon Hiseman. I bought it, listened to it and loved it. This man sang his sandpapered lungs out and played nasty jazz-blues. I later heard him with Ginger Baker's Airforce and followed his career until he died in mysterious circumstances from a subway accident. Through CDs, I've been able to get the albums he did with his classic group of Heckstall-Smith along with Jack Bruce and Ginger Baker a couple of years before they ended up together in Cream. I had heard they appeared in "Gonks Go Beat" and I think I even saw a clip from it once during a Colosseum documentary, but I definitely want this. If Netflix gets this one, it goes straight to the top of my queue.
As for CDs, I just heard about something called "Actionable Offenses" which sounds great. It's a collection of recordings of filthy stories that were made at the dawn of the recording era and for the most part, seized and destroyed by the authorities. Reviews of this have marvelled that explicit raunch existed way back when, which tells me that, hard as is it to believe, some people haven't been exposed to the many collections of dirty songs, movies and comics from the early 20th century that have come out in the last thirty years. Still this CD sounds unique and definitely seems to be worth a buy from Amazon.
Posted by Jerome Wilson at 11:24 AM