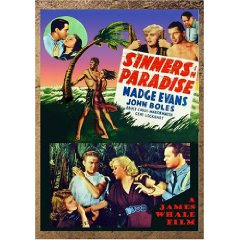 I've seen a bunch of movies lately. Innocence was a French film about a mysterious girls' school that had a David Lynch-like air of sinister weirdness about it but really emerged as a beautiful, optimistic story about childhood. The Wrong Road was an odd little B movie about two young people who chase down money they stole while pursued by a kindly insurance agent who pleads with them to go straight. The weird part is that the "kindly insurance agent" is played by perennial bad guy Lionel Atwill! I kept expecting him to steal the money himself by the end.

The most interesting in many ways has been Sinners In Paradise. This was a late James Whale film, one of the ones they always talk about when they mention his dismal later directing career. There wasn't much of his style in this picture about a group of disparate people stranded on a tropical island after a plane crash. The only Whale touch about it was Dwight Frye showing up for a second at the beginning.
The most intriguing part was that one of the writers on the movie was Lester Cole, one of the later Hollywood Ten. You could definitely see some Leftist sentiments in this film, at least leftist for 1938. One character was the thoughtless owner of a factory trying to get away form workers who were striking for a (oh, the horror!) 40 hour work week. She ends up changing her attitude and falling for the plane's steward. That was really only a subplot though. There was also a scene where two characters start burning thousands of dollars because money is no use to them on the island and the two real villains are a pair of violent munitions salesmen. It's amazing that stuff like this was once considered so inflammatory that it eventually cost Cole his career.
Posted by Jerome Wilson at 6:41 AM No comments: