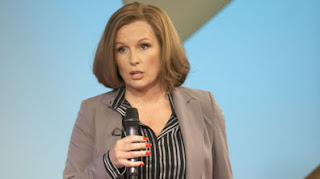 You can have Tina Fey. When it comes to funny women on TV I'll take British writer and performer Jennifer Saunders. Her show Absolutely Fabulous was a fearless slapstick classic about two middle aged women boozing and drugging their way through the fashion industry like the Swinging Sixties never ended. Her 2007 show, The Life And Times Of Vivienne Vyle, is even darker, going way beyond what a show like 30 Rock would even dare.
Saunders (above) stars on this show as Vivienne Vyle, a daytime TV host who runs a show where she parades the dregs of humanity before the cameras and tells them how disgusting they are under the pretense of helping them. There have been any number of these hosts in America,of course, from Jerry Springer to Maury Povich to Sally Jesse Raphael and beyond, but this character is supposed to based on a specific British TV star named Jeremy Kyle. If this concept had been attempted here by Fey or anyone else,  the host would be probably be humanized with some kind of inner conflict about what they are doing. Not Saunders, she makes Vyle a self-centered, unrepentant monster who will exploit anyone for her own gain, even her own husband.
There is still a lot of physical comedy on this show as on AbFab with Saunders still not above the occasional pratfall or bizarre sight gag. There are also a couple of characters that echo the earlier show's craziness. The talk show's producer, Helena, played by Miranda Richardson, is the same sort of scatterbrained, drugged-out mess as Saunders' Edwina and Vivienne also has a gay husband the same way that Edwina had a gay ex.
The overall tone of this show is much grimmer though. Vivienne is a more controlled person and she is so cold-blooded you can't identify with her in any way. There is a more sympathetic character in a therapist hired as a consultant on the show who is the closest thing to normal here and stands somewhat apart from the mad swirl of Vivienne's circle but he is really secondary. (Incidentally this show was created by Saunders and a clinical psychologist, Dr. Tanya Block. I haven't read anything where the doctor worked on a talk show but you have to wonder.) There is an evil genius in the way Vivienne twists a possible scandal involving her husband  to her advantage on live TV with a made up story of childhood abuse in the last episode but that's not something I could really laugh at. This is a fascinating show in its way, just not one of the laugh riots Saunders has done in the past.
Posted by Jerome Wilson at 2:50 PM No comments:

I was going to write something about the film Fillmore: The Last Days but I happened to see that Abbey Lincoln passed away today.

We seem to lose a plethora of giant jazz figures every year. In the last few months alone, Hank Jones, Fred Anderson, Bill Dixon, Harry Beckett and Willem Breuker have passed on. Now it's Abbey Lincoln. She wasn't as overall prolific as other great jazz singers but the work she did was impressive, singing powerful and passionate songs in a strident carrying voice that demanded your attention. She had two great periods as a vocalist, in the Sixties when she worked with her then-husband Max Roach for a few years. The highlight of that time being their monumental protest album, We Insist! The Freedom Now Suite. Then there was little music from her until she turned up on Verve Records in the 1980s doing a series of very personal and uncompromising records in the company of people like Stan Getz and Hank Jones. She wasn't a "pretty" singer but she got her message across.

This is a video of her on the old NBC "Night Music" show in the 80s doing Charlie Haden's "First Song".  Not only is she in great voice but she obviously lit a fire under host David Sanborn.

Posted by Jerome Wilson at 2:17 PM No comments: