How To End A Horror Movie

In the past couple of days I've seen a couple of horror movies that both end with a "big reveal" of a monster.  Together they show there are good ways and bad ways to do this. 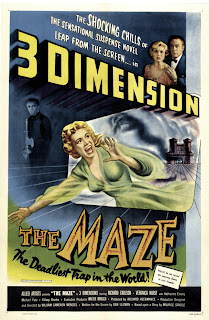 The bad one is The Maze, a 1953 3-D horror film directed by the great designer William Cameron Menzies.  It's standard "spooky castle" stuff with a titled Englishman shutting himself off from the world in a creepy old family castle and his fiancee and her friends trying to find out the secret that is making him do this.  The movie is atmospheric and all the shots of people walking through long corridors must have looked really powerful in 3-D. Then they come to the reason why the hero has become a recluse. I won't give it away but it involves an unseen relative and it is so jawdroppingly ridiculous it pushes this movie close to Robot Monster - Plan 9 From Outer Space territory.  Let's just say this movie could have been an inspiration to Jim Henson. It's hard to say what's worse, the monster itself or the explanation given for his existence.

The Spanish horror film [REC] from 2007 makes far more sense at its conclusion.  This is a Blair Witch Project-style effort supposedly filmed by a TV documentary crew that spends a night in a firehouse and follows two of the firefighters as they respond to a call about a sick woman in an apartment house.  The woman isn't merely sick. She is infected with something that makes her start taking bites out of people's necks and soon enough, in time honored George Romero tradition, policemen, firemen, the other apartment tenants and the TV people are fighting a losing battle against each other to keep from turning into cannibalistic zombies.

This film was actually remade in an American version recently called Quarantine.  That movie told basically the same story as this one but changed a couple of details seemingly to play to the "conspiracy theory" crowd, such as suggesting the authorities are telling the world everyone has been removed from the house and is safe while they have really been left inside to die.  The biggest change is in the final explanation for it all. There is no explicit "this is how it started" scene but at the end of both versions, the TV reporter and her cameraman, the last two survivors, ascend to the locked penthouse of the complex and discover a hidden laboratory.  In the American version there are newspaper clippings on the wall about a doomsday cult and just vague hints about what has been happening.  In the Spanish original, the clippings are about the demonic possession of a little girl and there is enough evidence mentioned from journals and tape recordings to enable the viewer to piece together the story and also make understand who the two monsters are that appear at the end.  Like Let The Right One In and seemingly, its American remake, Let Me In, this shows that foreign horror films make a lot more sense these days than many of their American counterparts.
Posted by Jerome Wilson at 9:04 AM No comments:

It's one thing to hear musicians on a recording but sometimes when you experience them live, you gain an entirely new appreciation for their work. I've heard CDs by Wadada Leo Smith, Vijay Iyer, John Lindberg and Pheroan AkLaff in all sorts of settings but just hearing them live as Smith's Golden Quartet was a revelation. This band has a dazzling, explosive power to it from AkLaff's savage yet melodic drumming to Smith's steely, demonstrative power on trumpet.

I'd always thought of Smith as a player who dealt in small notes and silences but here his playing was forceful and fiery. In a pre-concert talk he said his music was influenced by the blues and Miles Davis. You could hear both. There was a mournful blue touch in everything he played and Miles was there especially in his muted work and the way he shot out streams of notes over the occasional spate of electric rhythms from Iyer's electric piano and Lindberg's bass effects pedal.  The other major surprise to me was AkLaff who regularly worked his drumming into a nuclear frenzy but was always controlled and maintained the sense of the compositions.

The size of the audience was also heartening. This concert was held at the Coolidge Auditorium in the Library of Congress.  It was an auditorium that held a few hundred people and the place was packed. Every seat was taken and there were a bunch of overflow patrons around. Okay, so the concert was free but we are not talking about household names here. Jazz, especially this forward looking sort, is considered to be a marginal music yet this show drew a stunning number of people. It makes you think there's some hope yet.
Posted by Jerome Wilson at 9:47 PM No comments: