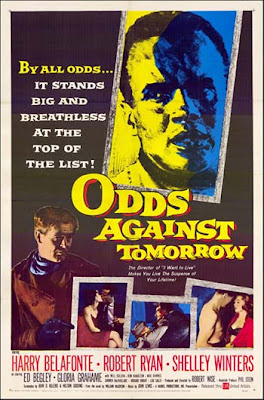 This is the kind of movie that seems slightly forced 40 years after the fact. It's a perfectly good thriller about three men who get together to pull off a one time bank robbery. The twist is that one of the men (played by Harry Belafonte) is black and another one (Robert Ryan) is a bigot.

That is certainly a workable angle and for the most part the movie works fine as a downbeat noir film with fine acting from Belafonte, Ryan, Ed Begley, Shelley Winters and Gloria Grahame and an excellent score from the Modern Jazz Quartet's John Lewis. The racial angle is played too blatantly but the movie ends in an apocalyptic climax that seems really abrupt. For the ending to feel real Belafonte's character would have to be as prejudiced as Ryan's is and there is really no evidence of that in the movie outside of one speech he gives to his estranged wife. Without it when the mushroom clouds appear at the end all you can say is "Huh?".
Posted by Jerome Wilson at 10:27 AM