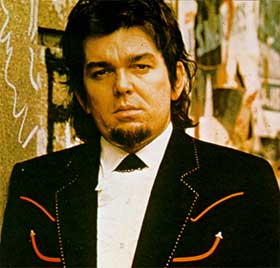 I first heard Beefheart in the early 70's when the local "alternative" radio stations, WHFS and WGTB, would occasionally play "The Blimp" from Trout Mask Replica. Then I actually bought his equally out-there followup album, Lick My Decals Off, Baby though, honestly I don't think I really got what he was doing at the time. He continued to be a constant presence on radio through the more accessible (Yeah, right.) The Spotlight Kid and Clear Spot,  the too-smooth Unconditionally Guaranteed and the back-to-the-gonzo sounds of Shiny Beast, Doc At The Radar Station and Ice Cream For Crow.

As the years went on his sandpapery singing, bent beat poetry lyrics and mutated delta blues-free jazz-desert crazed music began to make more and more sense. I've bought two copies of Trout Mask over the years and I think I saw him live during the later Radar Station days at the 9:30 club but, for the life of me, I can't remember any details about the show.  (EDIT: I may be confusing him with Pere Ubu's David Thomas who I do remember seeing at that club.) I do know that I've come to love his one-of-a-kind Howlin' Wolf meets Sonny Sharrock sound.  I was a bit dismayed to read in a book excerpt last year that some of Beefheart's weirdness came from drug intake. I had always though he was just naturally strange. No matter. The man made music like no one else on Earth.

I was listening to a Vic Chestnutt CD just now but when I read the news, I dug out my CD twofer of Spotlight Kid and Clear Spot and put it on. Right now I'm listening to him sing and blow nasty harmonica on "Glider" as the Magic Band beats out a hiccuping stomp rhythm on drums and slide guitar.  R.I.P., Captain.
Posted by Jerome Wilson at 5:03 PM