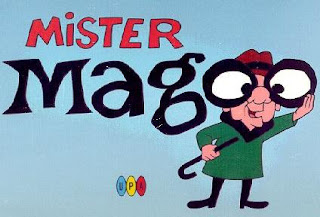 As I hoped for back in October here, Antenna TV came to my cable system this month, even though it didn't seem to fully start until around the 8th instead of January 1 like it was supposed to. With it, came their series of  Columbia theatrical cartoons, Totally Tooned In, which is being shown in a three-hour block from 7 to 10 AM on Saturday mornings. I sat down and watched all three hours today and even though nothing really blew me away, it was still fun watching a shifting melange of over a decade of changing Hollywood animation styles through cartoons I'd never seen before.

The star attraction, of course was Mister Magoo, the studio's one enduring cartoon legend. There was one of his shorts in each half-hour show, which all sported the unique modernist look of UPA Productions.  There was also another UPA-era short by John Hubley, "Family Circus", about a little girl who goes berserk when her new baby brother hogs all of her father's attention. This one had a section of animated crayon drawings that looked pretty unique among all the traditional cartoon antics that surrounded it. 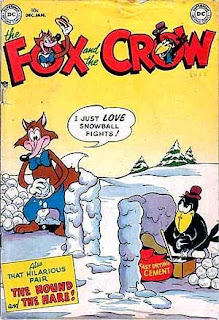 The earlier work shown seemed to indicate that Columbia's cartoons weren't very different from all the competition before UPA came along. There were shorts from the 30's produced by Charles Mintz that were mostly psuedo-Disney cuteness full of round faced little kids, puppies and other small animals and birds with one dark exception I'll mention later. Cartoons shown from the 40's, particularly with the studio's other stars, The Fox and The Crow, (seen on the left in their comic book forms) were far more full of the aggressive slapstick that was then ruling the roost at places like Warners and Universal. I'm sure that wasn't an accident since I recognized a few names in the credits from other animation studios, one of them no less than Max Fleischer who produced the two Fox and Crow shorts but also composer Darrell Calker who did a lot of the music for Walter Lantz cartoons.

While there were no really outstanding moments in any of these cartoons on first viewing, a few had interesting touches.  In the Fox and Crow short, "Slay It With Flowers" the two get into a nasty fight over Crow eating the seeds out of Fox's garden but stop abruptly when Crow finds out Fox is planting a Victory Garden. (This cartoon was made during World War II.) "Mountain Ears" is a Tex Avery travelogue-style short about hillbillys featuring a narrator with a Jack Benny-style voice who continually argues with a bratty kid on screen. At one point the narrator's supposed hands come on screen and try to catch the kid.

The most impressive cartoon of this particular bunch was "The Little Match Girl", a 1937 Mintz era rendition of the Hans Christian Andersen story.  It was gorgeous to look at, particularly the scenes where the little girl dreams of angels and Heaven and it was no surprise to learn that this short was nominated for an Academy Award. One thing though, the televised print of this went right up to the tragic ending of the story, the little girl freezing to death in the snow but stopped short of showing that. According to Wikipedia, that ending was part of the original cartoon which means sadly that some editing has taken place on a few of these TV versions. I'm not complaining though. I'm just happy that I'm finally getting to see this stuff at all.
Posted by Jerome Wilson at 5:01 PM