Rockin' In The Rockies with Moe, Larry and Curly

In flipping through TV channels last night I ran across a movie on Encore Westerns called Rockin' In The Rockies. From the description it seemed to be just a 40's B-Western, something I usually pay little attention to, but the cast list caught my eye. The stars were no less than The Three Stooges (!). 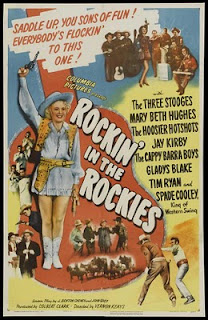 This was a completely new find to me. I knew about the features the boys made in the early 30's like Soup To Nuts, Meet The Baron and Dancing Lady and the B-western they did with George O'Brien in 1951, Gold Raiders, but I'd never heard of this movie before. Naturally I sat down and watched it.

It turned out to be a Western set musical comedy and the Stooges are easily the best things in it.  There isn't much plot. It starts out with Moe conning Larry and Curly and a couple of stranded showgirls into helping him prospect for gold.  That storyline peters out halfway through and is replaced by one of everybody plus some singing cowboys, played by the Hoosier Hotshots, auditioning for a Broadway producer who's come out Wesr for a vacation.

None of the other lead players in this thing make an impression. The male romantic lead, Jay Kirby, is "meh", the songs done by the lead women are forgettable and the Hotshots aren't all that at either music or comedy. However it was nice to see Vernon Dent, one of the Stooges' long time foils, in a supporting role even though he had no scenes with the boys.  There's also a good Western Swing number from Spade Cooley's band with Tex Williams on vocals. 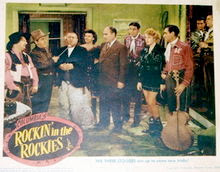 All the other cast members take time away from our beloved knuckleheads (seen on the left of this picture, barely) but they do show up in about half the picture, often repeating familiar routines from their shorts.  Curly doesn't seem as manic as at his best, possibly because this was made during the period where he began to have health problems, but he's still pretty sharp. There are unique features here in that Moe being cast as a ranchhand and Larry and Curly as itinerant show people, the three of them don't always work together. Larry and Curly do a lot of scenes as a duo with Larry taking over Moe's bossy leader role. Also this is the only Stooges movie I've ever seen where Moe spends the entire film with his hair combed back instead of in his familiar bowl haircut.  This isn't some great lost find of Stooge greatness, but just about anything featuring their craziness is worth a watch.
Posted by Jerome Wilson at 10:45 AM