I keep seeing more and more movies I want to write something about, so I'd better get something down before the queue gets any longer. 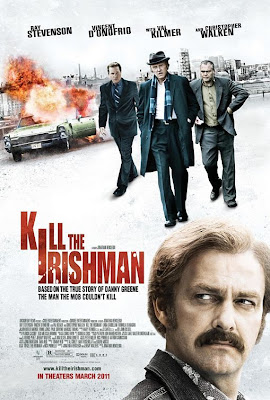 Kill The Irishman (2001)  - Somebody needs to explain to me how we got to the point where a mob movie with stylistic and cast connections to Tarantino, Scorsese, The Godfather and The Sopranos ends up only getting a token release in a few "arthouse cinemas".  That's just what happened to this film.  It is the true story of Danny Green, an Irish dockworker in Cleveland who worked his way up to be head of the local union, got in good with the local Mafia and eventually started a war with them which caused the bombing deaths of dozens of criminals as the mob tried to kill him over and over without success.

Like a classic western, you know how the story is going to go but it is so well told it's a pleasure to see it unfold, even if it nods directly to Godfather in a couple of scenes. It stars Irish actor Ray Stevenson who is very good as Green and he is supported by a stunning list of familiar crime movie and TV badasses including  Val Kilmer, Vincent D'Onofrio, Tony LoBianco, Christopher Walken, Vinnie Jones, Robert Davi, and Stephen R. Schrripa AKA Bobby Bacala from The Sopranos. When Paul Sorvino shows up late in the film playing Mafia don "Fat Tony" Salerno, it feels inevitable, not a surprise.

The movie is classic "tough guy" entertainment yet they couldn't find room for it in the multiplexes among all the CGI animated features, video game-derived fantasys and lunkheaded fratboy comedies around. Sad, just sad. 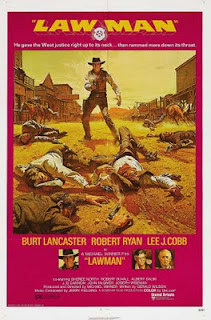 Lawman (1970) - By 1970 the Western genre was in total thrall to the gritty, hard-nosed sensibilities of the European "spaghetti westerns" and The Wild Bunch.  This is a fine example of what resulted.  Burt Lancaster plays a marshall who comes to a strange town to arrest a bunch of cowboys who had ridden into his town a few months earlier, shot up the place and accidentally killed an old man.  He finds that everyone around is hostile to him because the cowboys all work for the town's big rancher, played by Lee J. Cobb, a man everyone around owes their livelihood to.

It's the sort of tragic film where everybody knowingly acts out of duty or pride rather than common sense. The marshall knows that when he brings the men back they'll just probably pay a fine rather than be charged with murder, yet he goes after them all the same. The rancher knows he can make the entire thing go away with some apologies and money but some of his men insist on gunning for the marshall and wind up dead, meaning he now feels obligated to go after him.

The film shows its Euro influences in details like the realistic bloody shootings and having most of the local citizens including the mayor and the local marshall, played by Robert Ryan, spending their evenings at the town brothel where the women look older and plainer than the usual run of Western movie prostitutes.  Lancaster and Ryan are great as always as are supporting players like Sheree North, Robert Duvall and Richard Jordan but the best work comes from Lee J. Cobb, who constantly plays the rancher as a man tired of violence and death, not the blustery villain you might expect. Michael Winner directed this with maybe too many zoom shots but he gets the feeling of the story right.  I'm at a loss at to why he is so largely considered a hack. 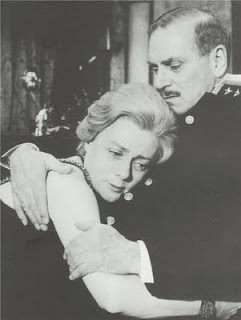 The Dance Of Death (1969) - My response to Netflix's upcoming price hike is going to be cutting loose of the streaming service I rarely use before the new pricing starts on September 1.  Before that I'll go over there more often to cherry pick a few things I might otherwise not see, like this 1969 film production of August Strindberg's famous play starring Sir Laurence Olivier and Geraldine McEwan (right) as an Army captain and his wife trapped in a hellish marriage. The two spend three acts torturing each other with insults, adulteries, betrayals and threats made palpable by the superb, roaring histrionics of Olivier and McEwan's subtler playing. By the way, I'd only seen McEwan before playing Miss Marple in recent years.  I was pleasantly surprised to see that back in '69 she was a babe.

The story drags a bit in the third act which feels like an epilogue to the preceding action designed to leave the audience with a somewhat happy ending and spends far too much time on the soppy characters of the couple's daughter and her pop-eyed cadet suitors but when Olivier and McEwan are snarling at each other, it is wonderful fun.
Posted by Jerome Wilson at 3:17 PM