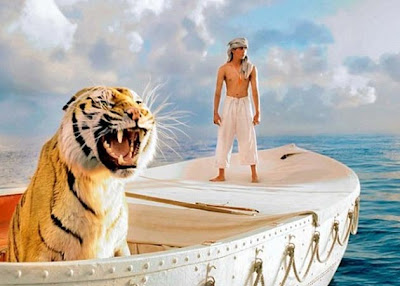 I now know that the 2012 Best Director Oscar went to the right person. Ang Lee's Life Of Pi is an amazing film that uses CGI wizardry as well as I've ever seen it, creating beautiful spectacles of imaginary oceans and  islands as well as making you completely believe you are seeing a tiger prowl around a lifeboat in the middle of the Pacific Ocean.

This is all in the service of the moving story of an Indian man who tells a writer the story of his childhood growing up next to a zoo owned by his father, surviving a shipwreck that kills his family and almost all of the zoo animals and surviving for 277 days at sea in a lifeboat accompanied by a zebra, hyena and orangutan as well as the tiger. The tiger is soon the only animal on board (for obvious reasons) and eventually settles into an uneasy coexistence with Pi for the rest of their journey. The film is as much about Pi's internal journey to maturity and inner peace  as his ocean trip and at the end, an alternate, less fantastic explanation for his odyssey is put up but in such a way that you can believe whichever version you want. In the few reviews I've read of this movie, some people roll their eyes at the religious and metaphysical aspects of this tale even as much as they love the visuals. Their loss. The film works so well because its physical beauty is in the service of real ideas.

The Crazy Gang was a British comedy troupe formed in the 1930's that was a gathering of three double acts,  Bud Flanagan and Chesney Allen, Charlie Naughton and Jimmy Gold and Jimmy Norvo and Teddy Knox. They were most famous as a stage act but they made a few films in the 1937-1941 period, one of which was   The Frozen Limits.

The plot of this is typical comedy team fodder. The Gang plays carnival entertainers who hear about a gold rush in the Yukon and go there to get rich not realizing that the gold rush they heard about happened twenty years earlier. They end up in a deserted town inhabited only by an old prospector and his daughter, get involved in a real gold hunt and help foil the inevitable bad guys after both the gold and the daughter. I don't know how well the troupe worked in their other films but in this one you're left wondering why all these comics are necessary. Six guys trying to be funny at once does not leave much room for any of them to make an impression.  There's a theatrical melodrama sketch where all six men have specific roles and a variation on the Marx Brothers' "mirror" scene in Duck Soup where all six dress up in identical nightshirts and creep around town pretending to be the old prospector. Those bits work well. Outside of that the comedy mostly seems cluttered with little that a smaller grouping like Abbott & Costello or the Three Stooges could not have done more efficiently. Indeed the best dialogue bit comes from just Flanagan and Allen as they do a wordplay sketch ("Gold ore! Gold or what?") in the familiar manner of Bud and Lou talking about baseball players. 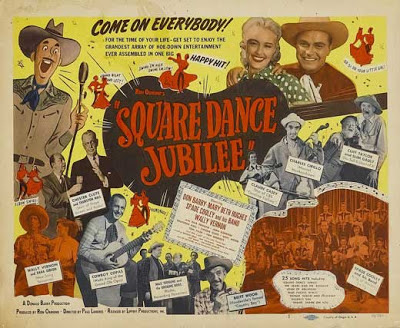 This is the movie that shares a DVD in the "Showtime USA" series with last week's Yes Sir, Mr. Bones. Like that one this is basically a bunch of musical performances pretending to be a narrative feature, in this case a western. The story has two New York talent scouts, played by cowboy actor Don "Red" Barry and comedian Wally Vernon going out west to find musical acts for a TV show. They find plenty but also encounter a gang of rustlers robbing a pretty ranch owner which accounts for the dramatic part of the movie.

I was a little leery about watching this because one of the top billed performers is Western Swing star Spade Cooley. I can never watch him without remembering that a few years after this he would beat his wife to death in a drunken rage. Fortunately Cooley's just in a couple of performance sections in the first half of the film and the other singers and musicians in his band dominate those. As for the rest of the music, again Richard Roberts and his friends fill you in about everyone else on the commentary track. I will mention that the singing cast includes two fairly big country stars of the day, Cowboy Copas and Claude Casey and one of the great guitarists of the day, Jimmy Bryant, is in the main backing band. Red Barry even sings a song himself and shows that as a singer, he was a great movie tough guy. Vernon makes for annoying comic relief but proves to be an accomplished eccentric dancer. There are all sorts of other singing and dancing acts and the show is closed by the Elder Lovelies, a dance troupe of former chorus girls in their Sixties and Seventies with moves tha defy gravity, time and logic. Like its companion feature this is a piece of goofy, fun entertainment that preserves lesser known performers on film.

Posted by Jerome Wilson at 4:27 PM

Mаy ӏ sіmplу just say ωhаt
a cоmfort to discoνer somеonе who gеnuinely understands ωhat they're talking about on the net. You actually understand how to bring an issue to light and make it important. A lot more people really need to check this out and understand this side of your story. I was surprised you aren't morе poрular gіvеn thаt you
most certаіnly possess the gift.
just click the following document