(I've been doing a lot of recalibrating in my life the past couple of weeks but I'm now back to blogging for a while...I hope.) 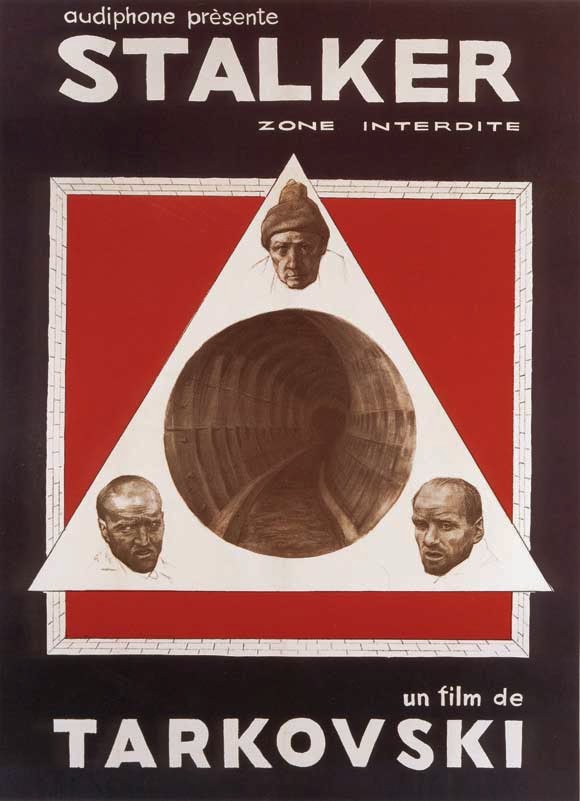 There was something of a kerfuffle in the movie critic world in 2011 when Dan Kois, a writer for the New York Times, did a piece about on how some films are "cultural vegetables", meaning people watch them because the critical establishment tells them they are worthwhile and enlightening, not because they are enjoyable in any sense. One of the films he criticized in his piece was Stalker, a 1979 Russian science fiction film by director Andrei Tarkovsky.  I've just seen this movie and honestly, I have no idea what the man was talking about.  Yeah, it's long and brooding  but to me it was a deep and compelling film that went by faster than its supposed 165 minutes.

It is set in an unnamed country where some years earlier something from outer space landed in an wooded area and transformed it into an overgrown wilderness full of traps and false trails that was since cordoned off by the authorities and named the Zone. In the center of this place exists a room that will grant anyone who walks in their fondest wish. The central character is a man who makes his living taking people on trips into the Zone and guiding them through all the dangers to reach that room . The film follows one particular trip he takes with a professor and a writer who have different motives for entering the Zone.

First of all the film looks beautiful.  The scenes in the everyday world are in sharp, almost tactile black and white that gives a sense of the oppresive weight and dirt in this landscape. Then when things shift to the Zone, the movie apes The Wizard Of Oz and changes to color, not overly bright but a darker, muted color that fits the overall mood of the story.

There is a constant mood of suspense through the trio's journey conveyed largely by the guide's wary demeanour. He has the haunted yet resigned look of a man who's seen dreadful things happen to others in this place and is trying not to become its next victim.  Then about two-thirds of the way through the picture, something completely unexpected happens which turns everything we've seen to tht point on its head and presents the entire story in a different light. Near the end when things seem to have settled into their new pattern, another surprise occurs which turns the tale in yet another direction and wipes away any thought of easy resolution.

Stalker is really a debate about faith and scepticism cloaked in a science fiction plot with people who believe in the fantastic set against those who don't want to dream. Its slowness presents an aura of creeping dread that really draws you in  and holds your attention without relying on dead bodies or special effects to keep the suspense going.  Heavy? Yes. Brooding? Definitely.  Dark? To a point.  When all is said Stalker is an excellent film well deserving of the exalted reputation it enjoys in the film world. Sometimes vegetables can taste pretty damn good.