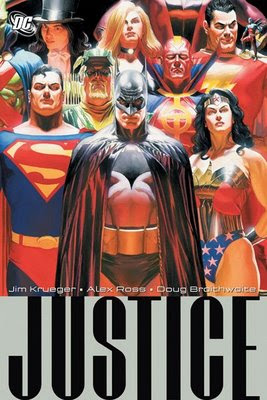 I have a long time interest in comic books, both for the art and, at its best, the storytelling. Even so I haven't followed the DC and Marvel lines for a long time, in part I just don't have the time, money or space to read and collect the stuff anymore, in part because I'm just turned off by the cheap cynicism and convoluted storytelling that has consumed both companies. Still I just have enough interest left to pay attention to it all and occasionally wonder if I'm missing anything. I finally ran across one story that appealed to me, DC's Justice.

Justice is a maxiseries by Jim Kreuger, Alex Ross and Doug Braithwaite featuring the Justice League Of America. It's a story blessedly free of all the recent twists and turns of DC continuity that is simply about all the classic Justice League members, Superman, Batman, Green Lantern, et al., dealing with the combined menace of a bunch of their old enemies who suddenly present themselves as the saviours of humanity. The tone is serious but not overly grim with personalities well sketched and characters acting recognizably. Ross' and Braithwaite's art is epic and powerful giving a weight to this cast, especially the villains, that they rarely had in the formative 60's and 70's.

Of course I just read the first of three volumes, so now I want to find the other two, which is more than I've been able to say about any super-hero comic in years. This was not enough to make me a comic book junkie again but it reminded me what I ever got out of the stuff.
Posted by Jerome Wilson at 12:56 PM