Gone To See The Man Upstairs 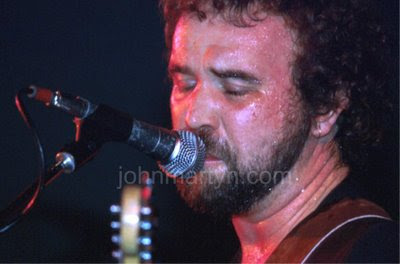 I don't usually post anything when someone I admired dies. I even ignored Patrick McGoohan's passing. That's because I usually run across scores of tribute to that person. Today is different because one of my favorite musicians just died and he's someone I'm not going to see a lot of tributes to right away.

Singer-songwriter John Martyn passed this morning at the age of 60. Martyn came up in the British music scene as one of the many folksingers of the mid-60's but his muse took him in his own direction with a viscous, fluid music that encompassed folk, jazz, funk and blues covered over by a husky, burring voice that seemed to emerge out of a fog. I first heard him in the early 70's with the song "Solid Air", a serpentine, half-submerged groove of dark, ambient jazz and I followed his work through albums like One World, Sunday's Child and Grace And Danger. I followed him as he cut his own individual path through folk songs, electric noise, reggae and dub with amazing songs like "Man In The Station", "Bless The Weather", "May You Never", "Discover The Lover", "Our Love" and "Big Muff".

Martyn's music turned a little too mellow in the 80's and eventually it became very hard to find his albums in the U.S. when he actually released something. Most of his recent CDs seem to be releases of old concert tapes. I have run across some quality later material though. One is The Church With One Bell, a sweetly funky covers set that touches on Ben Harper, Elmore James, and Billie Holiday with snaky readings of Randy Newman's "God's Song" and Portishead's "Glory Box" and a spine-tingling "Death Don't Have No Mercy". The other is, barring some posthumous release, his final release, On The Cobbles memorable if for no other reason than a gritty duet with Mavis Staples on "Goodnight Irene". Martyn was one of those singers who could chill your blood and haunt your nightmares. I wanted to post some clips of him but YouTube seems to running really slow today. I'll try to get some up tomorrow.
Posted by Jerome Wilson at 5:48 PM