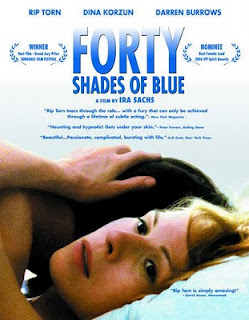 I think I heard about the film Forty Shades Of Blue on a blog where someone was listing unknown "great films". After watching this I don't think it qualifies. The premise can be summed up like this: A legendary Memphis music producer has a much younger Russian girlfriend and son. He is visited by his estranged adult son.

My main problem wasn't the familiar plot though. It was the characterizations. You'd buy this story if the producer, played by Rip Torn, was a cold-blooded monster but he's not. The character seems inspired by Sun Records legend Sam Phillips and Rip plays him as basically a nice, gregarious guy. He has a tantrum or two, most demonstratively in a recording studio where you would expect a producer to scream and holler. He does act cold and distracted around his son but he never shows any of the nasty sarcasm you would expect and he's particularly nice towards his young lover, never even putting up a fuss when she goes out for the night on her own.

This points up the other problem. In contrast to Torn, the girlfriend and the son come off as self-absorbed, unsympathetic jerks who mope around feeling sorry for themselves. There are scenes where you do get a good sense of the alien loneliness of the girlfriend, played by Dina Korzun, as she wanders aimlessly in department stores but the son, played by Darren Burrowes, just seems a brooding ninny whose likability isn't helped by the fact that he's got a pregnant wife at home while he's making the beast with two backs with Korzun.  The film also misses out by not being more immersed in all the great music of Memphis. There are a few blues and soul tunes on the soundtrack but all the big dramatic points are underscored by generic orchestral music, this despite a plot that is a country song come to life.

This is one of those movies that tries to be more sympathetic to the younger generation than the old, only the older generation comes off cool and fun and the younger one seems immature and miserable. Rip Torn's subtle portrayal of a man who loses what he loves and can't understand why is fine, but after watching this movie I felt like pulling out one of his wild older films like Payday or Coming Apart and see Rip really tear things up, no pun intended.

I don't have either of those movies to hand so after watching this, I went to my Horror Classics box set and pulled out a movie at random, which turned out to be Lon Chaney Jr.'s Indestructible Man. 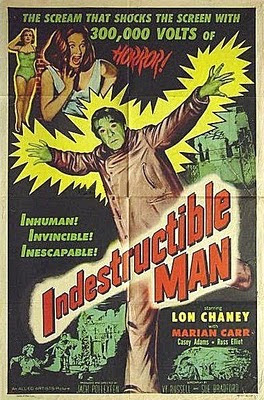 This was a cheapie from the 50's that starred Chaney as a killer who is executed but then revived by a scientist seeking a cure for cancer (?).  Revived with impentrable skin and super-strength, he then walks from San Francisco to Los Angeles looking for the double-crossing partners who sent him to the death house, breaking backs and tossing people to their deaths along the way.
I wish the movie was more entertaining than it is. Most of Chaney's menace consists of him walking fast in a big jacket and grimacing in closeup. The producer managed to get the requisite cheesecake in by having the heroine work in a burlesque house. The best part for me was in seeing a few familiar actors turn up. The actor known both as Casey Adams and Max Showalter, usually a character guy, played the lead cop investigating the case and the would-be cancer curer was played by Robert Shayne, best remembered as Inspector Henderson on the old Adventures Of Superman TV show. Even weirder, his assistant was comedian Joe Flynn forever known as Captain Binghamton on McHale's Navy.
There are a bunch of genuinely fun and classic movies in that horror box like Little Shop Of Horrors, House On Haunted Hill and Carnival Of Souls. Hopefully I'll get around to some of them soon.
Posted by Jerome Wilson at 4:28 PM