A Visit From The Godfather

Last Wednesday I got on the Internet and the first thing I noticed was a headline in my email that said "STAN TRACEY TRIO".  I thought it was a notice about some concert in New York or Philadelphia that I had no shot of getting to but I clicked on the headline anyway and learned that British jazz pianist Stan Tracey was playing at the United Methodist Church in Baltimore that coming Sunday, the 13th, at 4:30. I spent the next day studying subway and train schedules to see if I could make the trip. Yesterday I was in a sweltering church in Baltimore mesmerized by a concert I never dreamed I'd see. 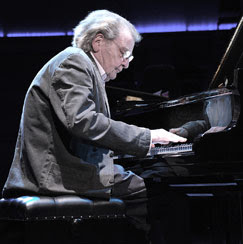 Stan Tracey is a venerable pianist of 84, referred to as the "Godfather of British Jazz" and one of the legendary figures in the music. He spent the Fifties in London clubs playing behind visiting American stars like Sonny Rollins and Ben Webster and in the Sixties, began a prolific career performing and writing his own work in various group formations; solos, duos, trios, sextets, octets, big bands and orchestras. His 1965 recording, Under Milk Wood, based on the Dylan Thomas play, is one of the most beloved jazz recordings ever made in Britain, on a par with the respect shown A Love Supreme or Kind Of Blue over here. His music comes out of the twin roots of Ellington and Monk but he has been flexible enough over the years to experiment with freer sounds, particularly in duets with two of the grandmasters of British free improv, Evan Parker and Keith Tippett.  Still he's almost completely unknown in the States because he rarely plays over here and his records are not distributed in America. All that made it a very special occasion and a personal must for me when he showed up on Sunday.

At 4:30 sharp he slowly came out from the back, a small man with a mane of grey hair touching his shirt collar, along with the other members of his trio, bassist Andrew Cleyndert and drummer Clark Tracey, Stan's son and frequent collaborator. He briefly announced that they were starting with an obscure Ellington-Strayhorn piece, "Great Times" and they were off. Tracey's playing still contains recognizable pieces of Ellington and Monk with crashing block chords and twisted, broken rhythms but those elements are woven into his own unique driving style. He didn't play any of his own innumerable compositions.  Outside of the Ellington and two closing Monk tunes, everything he played for 90 minutes was a standard which was fine by me. At his age he's earned the right to play whatever the hell he wants to and like other senior jazz masters Sonny Rollins and Lee Konitz, any tune Tracey plays becomes fodder for his stabbing and driving style whether the original melody is adhered to or just used as a signpost.

After three numbers, the trio was joined by local saxophonist Ron Holloway whose exuberant r'n'b tinged playing put a nice edge on the trio's brisk interplay. There were only about 30 people in the audience but looking around they all seemed to really enjoy the performance. For me it was more than worth the all day and night trek from Annandale, VA and back. Records are great but when you get a chance to see a living legend in person you should always take it.
Posted by Jerome Wilson at 5:02 PM