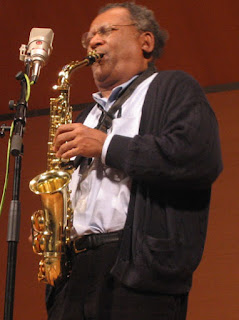 You don't often get to say you've seen a genius perform, but just off the top of my head, I've done that four times.  Once was seeing Cecil Taylor's trio at Blues Alley several years ago and the other three have been performances by Anthony Braxton, two long ago in a quintet with the Rova Saxophone Quartet and a duo with George Lewis, and the third tonight at the Kennedy Center.

Braxton is one of the most celebrated and far-ranging figures in modern jazz/new music/what-have-you, a composer, player, and teacher who, over five decades, has pioneered the solo saxophone album, written for ensembles of every size and even composed operas.Tonight Braxton played DC's usually staid home of Official Culture with his Diamond Curtain Wall Quartet made up of the man himself on reeds of every size, Mary Halvorson on guitar, Ingrid Laubrock on saxophones and Taylor Ho Bynum on brass. They were brought there by pianist Jason Moran, the Center's forward thinking Artistic Advisor for Jazz who sat in with the group, making it a quintet.  I've heard Braxton recordings in many different settings but this was the first time I'd experienced the intricate ensemble music he's been making in recent years live. The show was amazing.

For this group Braxton starts by cueing up sound files on a laptop, then turning over an hourglass ("It helps us" he said to the audience) to start the performance.  The group then weaves over, under, around and through the computer sounds for the next seventy-odd minutes. Everybody in this group is an imaginative and experimental leader in their own right but they had no trouble in fitting right into Braxton's concepts.  Sometimes the horns shrank to whispers and barks, sometimes there were gorgeous bits of melody.  Halvorson, who studied under Braxton at Wesleyan University, would cut through the haze with heavy power chords and underscore the overall sound with delicate picking. Bynum, who has been releasing much of Braxton's recent large scale work on his Firehouse 12 label, barked, growled and smeared on cornet, various trumpets and even trombone.  Moran, who to my knowledge was new to this music, stayed in the game admirably, filling in rhythms behind the others and occasionally playing agitated free solos. Laubrock, another fairly new participant to this world, played forceful tenor, alto and soprano and added her own arsenal of vocalized sounds and squeaks.

The leader himself was awesome to behold, playing everytihing in the sax family from a small sopranino to a huge contrabass instrument he wheeled into position on a tripod.  Braxton is so celebated as a theorist and composer today you forget that he is also a hellacious sax player and, though 67 years old, he was playing tonight as beautifully and intensely as he ever has.  He had a couple of solo passages on soprano that were so hair-raising they nearly had me screaming with joy. I kept my cool though because the audience stayed respectfully silent throughout the proceedings.

That silence seemed to be a good one.  The typical Kennedy Center audiences tend to prefer safer fare so I wondered how they would take to this wondrous madness. A few people did leave during the show but I'll give most credit. They stayed until the end.  A friend told me later that there were not a lot of the usual faces at this show so many people probably knew what they were in for. I'm sure there were a few Center regulars though who were exposed to something radically new tonight.  Hopefully the Center will continue to allow Moran to bring in "out there" masters like Braxton in the future.
Posted by Jerome Wilson at 8:41 PM