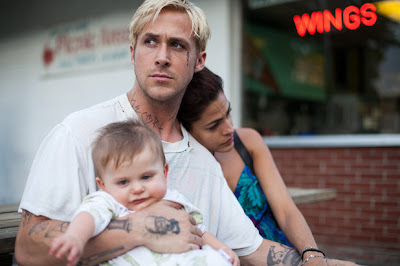 This film is a multigenerational saga about families, responsibilities and redemption that resembles Greek tragedy but ends on a far more uplifting note.

It plays out in three acts and starts with Ryan Gosling as a character who superficially resembles the one he played in Drive, a quiet drifter who is also a gifted mechanic and driver. In every other way the two are very different. The earlier guy was a modern samurai. This one is more like someone Mickey Rourke would have played ten years ago, a blue collar rebel  who does motorcycle stunts for a traveling carnival. On a stop in Schenectady, New York, he meets a woman he was with a year before and finds out she's had his baby. The woman, played by Eva Mendes, has moved on and married someone else but Gosling's character, Luke, wants to claim his parental responsibilities and is determined to get Mendes and the child to run away with him. That leads him to a bad moral decision and a confrontation with a police officer played by Bradley Cooper.

The second act focuses on Cooper's character after that encounter. He ends up wounded in the line of duty and is hailed as a hero cop. Instead of drinking in all the cheers though, he is more concerned about the welfare of Mendes and her baby who happens to be the same age as Cooper's son. He is also taken into the confidence of a bunch of crooked cops who encourage him to join their gang. He makes his moral decision about this which works out well for him.

This leads to the third act fifteen years later. Gosling's and Cooper's sons are now teenagers and meet in high school. One is troubled and knows nothing about his real father. The other is a spoiled rich kid. They bond over smoking dope together having no idea how their fathers are connected. Eventually Gosling's son finds out and things get very ugly.

This is a well-structured, beautifully shot film that really uses New York highways and forests well for atmosphere and a sense of place. The cast is uniformly fine with Gosling and Cooper really excelling at conveying the subtle nuances and shifts in their characters.  The story plays out with tricky but logical precision even though there are a couple of places where the characters have to do or say carelessly dumb things to move the plot along. For example, you have to accept the idea that only teenagers know how powerful Google is.

Most suprisingly the movie ends positively. Not everyone dies and, at the end, a major character seems to have conquered his demons even if another has a last scene turning to the light that comes out of nowhere. Even with its slight flaws though Place Beyond The Pines is a rewarding and powerful drama. 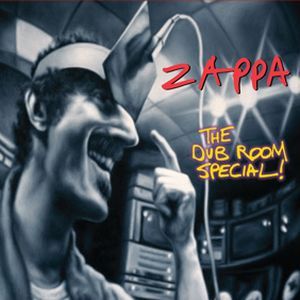 This is a 1982 public access TV special Frank Zappa cobbled together from various sources. Some of it is him clowning around with others in the editing studio he called the Dub Room and a few animated Claymation clips appear, but the lion's share of the show comes from two live concerts by differing Zappa bands, a 1974 performance by the version of the Mothers that included George Duke on keyboards, Chester Thompson on drums, Napoleon Murphy Brock on reeds and vocals and Ruth Underwood on percussion and a 1981 show by the Zappa band that featured guitarist Steve Vai and druumer Chad Wackerman. In the earlier performance the 1974 group is eye-openingly good, tearing into favorites like "Stinkfoot", Cosmik Debris", and "Montana" with gusto and plenty of visual fun in Brock's theatrics, a man in a gorilla suit who wanders through one number and frequent shots of Underwood as she scurries around her drums and marimbas.  In the 1981 show, all the lyrics are just about sex, drugs and groupies but the music is even heavier and faster jazz fusion. If you forgot how good Frank Zappa's music could be, this will remind you. 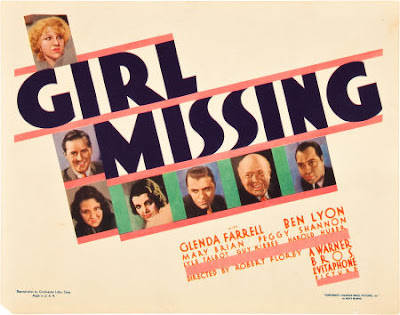 Some movie buffs have become fascinated with what they call the "Pre-Code Era", that period of early talkies from about 1930 to 1934 when Hollywood films often dabbled in risque situations and themes, something that seems to amaze people who previously old Hollywood films had always been squeaky clean.
I had the chance to watch a lot of early 30's films on Washington and Baltimore television stations back in the 70's so that kind of stuff  is no surprise to me though I do still run across the occasional old movie whose sexual or moral stance has me doing a double take. Girl Missing...is not one of those.

It looks promising, a 1933 Warner Brothers melodrama about a chorus girl who disappears after marrying a millionaire and two other chorus girls who play detective to find out what happened. The problem is the movie is just dull. Glenda Farrell, as one of the sleuths, spits out her lines 50 miles a minute but the rest of the cast is almost comatose. Director Robert Florey had his strong points, but fast-paced crime stories were not among them. The other leads, Ben Lyon, Mary Brian and Peggy Shannon are all bland and there's no real tension even as the plot unfolds. The only other entertaining performers are Ferdinand Gottschalk and Helen Ware as the missing bride's parents and Guy Kibbee playing a would-be sugar daddy though he's only around for the first scene.  This is proof that not every early-30's movie is an undiscovered gem.
Posted by Jerome Wilson at 4:22 PM