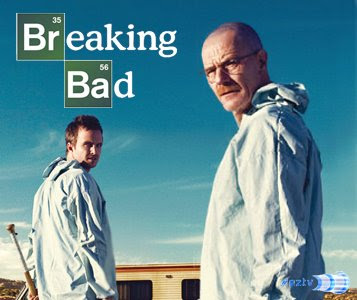 I'm still slowly making my way through Breaking Bad on Netflix. I'm now up to the halfway point of Season 3 and I'm constantly amazed by the plot twists and intricate character psychologies of this series.

I don't get the concept of binge-watching. I would think that in watching any really good TV show you would want to take time to savor each episode instead of burning through a bunch of shows in one sitting. That's especially true with a show like this where every installment has some sort of twist or revelation that I need to think about after I watch. The writers of this show are particularly brilliant at misdirection. You think you know where a plotline is going but then presto! it goes somewhere completely unexpected. And these turns never feel forced or contrived. As crazy as they can sometimes be, they always so far turn out to have a logical if occasionally bizarre progression.

The whole of Season 2 was a great example of misdirection. Throughout several episodes there were flash forwards to scenes of a hazmat team retrieving burned debris from the White swimming pool.  Considering that this show is about an ordinary high school teacher slipping deeper and deeper into the drug trade you think these scenes indicate one thing.  Then in the final episode of the season, "ABQ", they pull the rug out and those shots turn out to mean something completely different. Similarly in Season 3 so far, one of the background plotlines has been about twin Mexican hit men out to kill Walt. In the episode I just saw, "Sunset",  that story takes a sudden detour that makes me even more curious about what happens next.

I know that the final episodes have begun airing on AMC and I'm trying like hell to avoid reading anything about the show online. I ignore anyting about it on the Grantland website and stay away from posts on other blogs. I know that all the main characters, Walt, Skyler, Jesse, Walt Jr, Hank and Marie survive into Season 5. Other than that I don't want to know anything that happens before I actually watch the episodes. I'm just enjoying the uniformly great acting and writing of this amazingly creepy saga about a man's fall into darkness. Also I know Bryan Cranston has won several Emmys for this show but he also deserves some kind of award for his pizza tossing.
Posted by Jerome Wilson at 2:07 PM